Biography Dr. Andarawis-Puri joined the Cornell MAE faculty as the Clare Boothe Luce Assistant Professor in January 2016. Prior to her appointment at Cornell, she was an Assistant Professor in the Leni and Peter W. May Department of Orthopaedics at the Icahn School of Medicine at Mount Sinai in New York City. She holds a B.S. from Columbia University in Biomedical Engineering, and a Ph.D. from the University of Pennsylvania in Bioengineering, specializing in Biomechanics, with Dr. Louis Soslowsky as her graduate mentor. Following her graduate studies, she completed her post-doctoral training... Read more 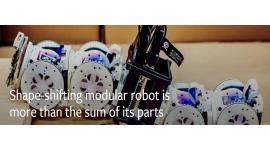 General-purpose robots have plenty of limitations. They can be expensive and cumbersome. They often accomplish only a single type of task. But modular robots – composed of several interchangeable parts, or modules – are far more flexible. If one part breaks, it can be removed and replaced. Components can be rearranged as needed – or better yet, the robots can figure out how to reconfigure themselves, based on the tasks they’re assigned and the environments they’re navigating. Now, a Cornell-led team has developed modular robots that can perceive their surroundings, make decisions and... Read more 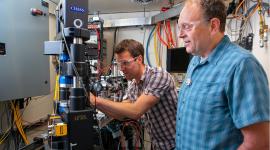 For the past 10 years, the U.S. Air Force has funded research on high-performance materials at the Cornell High Energy Synchrotron Source (CHESS). The partnership has resulted in numerous advances, including a greater understanding of metal fatigue and analysis of the best metals for aircraft. This partnership was extended with $8 million in funding to CHESS as part of the fiscal year 2019 defense appropriations bill, a $674.4 billion package that President Donald Trump signed into law Oct. 1. The bill passed both the U.S. Senate – supported by New York Sens. Charles Schumer, who is Senate... Read more 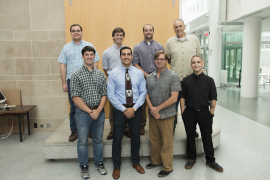 A Match Made in Durango--Cornell and Fort Lewis College

Dream Big Way back around 1974 a talented high school football player in Durango, Colorado had a coach who convinced him to leave town and dream big. So instead of staying in the Four Corners region and attending college there, Matt Miller moved 350 miles away (if you take US-285) to Boulder, Colorado. At Boulder, Miller earned a B.A. in geology and was an All-America offensive tackle drafted in the fourth round by the Cleveland Browns. He went on to a six-year profession football career. When his football career ended, Miller started a second career as an academic. He earned a B.S. in... Read more 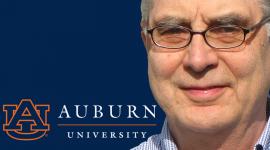 Auburn University researchers are leading a $2 million U.S. Department of Energy project that promises to improve fuel efficiency and economy. The project will create a bio-based fuel additive that can be blended with diesel fuel to reduce soot and greenhouse gas emissions and yield cleaner engine operation in cold-weather conditions. Joining as collaborators in the research are Cornell University, the University of Alabama, Virginia Tech and corporate partners Microvi Biotech, Inc. and EcoEngineers. The project is one of 42 totaling $80 million awarded by the DOE to support advanced vehicles... Read more

MAE's Prof. Fisher is one of 4 recipients of a

The award will be presented on Saturday, September 29 during the ASBMR 2018 Annual Meeting in Montréal, Québec, Canada. Read more

win the College of Engineering Excellence in Teaching Award (Cornell University) 2018 for their strong teaching and excellent revamping of the undergraduate solids curriculum. Read more