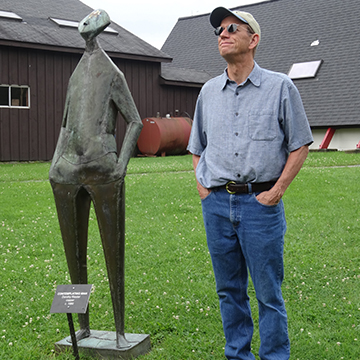 Professor Dawson attended Montana State University, receiving a Bachelor of Science degree in Mechanical Engineering in 1972, and Colorado State University, receiving Master of Science and Doctor of Philosophy degrees in Civil Engineering in 1974 and 1976, respectively. Prior to his graduate studies, Professor Dawson worked for one year as an Associate Engineer at the Advanced Reactors Division of Westinghouse. Following his graduate students, he worked for three years as a Member of the Technical Staff in the Computational Physics and Mechanics Division of Sandia National Laboratories. Professor Dawson joined the Cornell faculty in 1979 as an Assistant Professor in the Sibley School of Mechanical and Aerospace Engineering. He was promoted to Associate Professor in 1984 and to Professor in 1990. He has enjoyed sabbatical leaves at the Center for Materials Science, Los Alamos National Laboratory, in 1985-86, the University of California, Berkeley, in 2008 and the University of British Columbia in 2009. He is active in research at the interface of solid mechanics and materials science computational mechanical, with emphasis on computational mechanics applied to problems in mechanics of materials. He teaches courses related to stress analysis, metal forming, vehicle mechanics, solid mechanics and finite element methods.

Dr. Dawson's primary area of research is the mechanics and materials science associated with deformation processes of polycrystalline materials. The general aim of the research is to integrate modern constitutive theories for the mechanical behavior of these materials into rigorous mechanics frameworks and to solve the resulting systems of equations by numerical techniques. The end goal is a more fundamental understanding of the relation between a material's microstructure state and its derivative mechanical properties. Recent efforts include the application of state-variable constitutive models that quantify strain hardening, texture evolution, and damage growth into finite element based numerical formulations. Application areas include metal forming, solid-state welding, fatigue and accelerated property evaluation. Special attention is given to the coordination of in situ diffraction experiments and finite element simulations to investigate modeling of behavior at the scale of individual crystals.