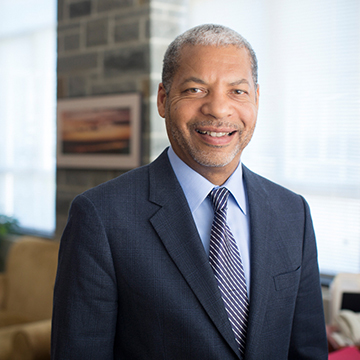 Professor Emeritus
Sibley School of Mechanical and Aerospace Engineering
lc246@cornell.edu
Back to Directory

Lance R. Collins finished serving his second term as the Joseph Silbert Dean of Engineering at Cornell University on July 31, 2020. He is now the  naugural vice president and executive director of Virginia Tech's new Innovation Campus. Under Dean Collins’ leadership, Cornell Engineering has maintained its rank as one of the top engineering colleges in the world. He was part of the leadership team that successfully bid to partner with New York City to build Cornell Tech, which opened its Roosevelt Island campus in 2017. He is leading one of the largest capital campaigns in the college’s history, aimed at renovating most engineering buildings to accommodate the college’s 10-year strategic plan for growth. Dean Collins has accelerated the college’s efforts to diversify its faculty and student body. Since 2007, Cornell Engineering more than doubled the proportion of underrepresented minority students from 7 to 19 percent. Over the same period, undergraduate female enrollment increased from 28 to 47 percent, more than twice the national average. And the Class of 2021 is the first in the college’s history to contain more women than men. For these efforts he received the inaugural Mosaic Medal of Distinction from Cornell Mosaic. He has also overseen a boom in entrepreneurship programming at Cornell Engineering with the establishment of many new programs and incubators built to foster commercialization and help bring new technologies from bench to market. Collins serves on Cornell’s Senior Leaders Climate Action Group, focused on improving climate trends by spurring cross-disciplinary solutions on campus and globally, including the ambitious Earth Source Heat project that aims to heat Cornell’s 745-acre campus with geothermal energy. Collins is a professor of mechanical and aerospace engineering and his research is focused on the application of direct numerical simulation to a broad range of turbulent processes. He received his B.S. from Princeton University and his M.S. and Ph.D. from the University of Pennsylvania.

The Mosaic Medal of Distinction recognizes alumni, faculty, and administrators for their commendable impact or leadership in creating opportunities and access for diverse communities within the academy, industry, public service, and the professions. This is the first year the medal is being awarded.

Professor Collins' research interests are on the application of direct numerical simulation to a broad range of turbulent processes. Areas of current interest include: (i) turbulent coagulation of aerosol particles; (ii) experimental and numerical evaluation of Lagrangian statistics in turbulent flows; (iii) mixing and chemical reaction in turbulent flames; (iv) turbulent breakup of microstructures (e.g., drops, polymers and red blood cells); (v) drag reduction due to polymer additives. A unifying theme is the importance of fine-­--scale (micro-­--turbulence) transport to these phenomena. A second focus is on developing a new class of turbulence models that are capable of describing micro-­--turbulence processes. Recent contributions have been made toward extending fundamental spectral theories of turbulence to applications (i) and (ii). Current emphasis is on validating the models and incorporating them into computational fluid dynamics codes.